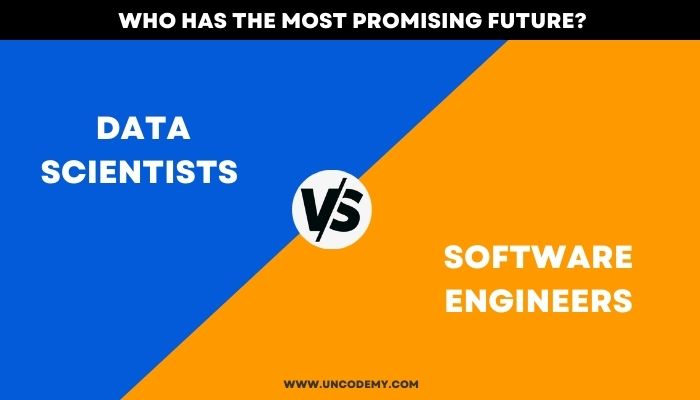 Who Has the Most Promising Future

Data Scientists vs. Software Engineers: Who Has the Most Promising Future?

“Data Scientist” and “Data Engineer” are becoming increasingly prominent job titles. A software engineer, on the other hand, has been around for quite some time. Furthermore, many people interested in a career in computer science or a similar sector may be unaware of the distinctions between “software engineer” and “data scientist” professions. This is due to the fact that being a data scientist is a relatively new job title.

What is Data Science and Software Engineering?

Data science is an interdisciplinary subject that studies many types of data, both structured and unstructured, using a variety of scientific processes and methodologies. It is also considered one of the fastest-growing fields. To extract important insights from data, data science employs a variety of technologies such as AI, machine learning, and data mining. The usefulness of approximation, data analysis outcomes, and interpretation of those results are all extensively emphasized in data science. Data scientists, like software engineers, strive to improve algorithms and balance the speed-accuracy trade-off.

The Scope of Data Scientists and Software Developers

A software developer is someone who creates comprehensive software architectures for complicated systems by writing lines of code and designing them. A data scientist, on the other hand, is someone who uses mathematics, computer science, and other disciplines to tackle complicated data problems.

Software engineers mostly design data-generating products, whereas data scientists evaluate the same data. Developers focus on designing apps and mobile apps, while data scientists translate meaningful information into user data that a business may use. Data scientists are desperately needed by businesses to extract relevant data for a variety of purposes, including marketing, finance, banking, and so on.

Data is infinite, software engineering is the current craze, but data science is the way of the future. For decades, many firms have crunched data to make decisions, forecast the stock market, trade, weather conditions, and other things, and this is what data science is all about! Data is exploding like a can of worms nowadays. Almost every business handles a million bytes of data each day.

Now, let’s look at how you can get started in data science and software engineering.

We don’t see this needing slowing down anytime soon, as it is a rapidly growing field. Specializing in data science can lead to positions in a variety of fields.

As a software engineer, you may expect to advance your career on a regular basis. New opportunities will arise as you develop technical knowledge and expertise. The following positions can help you get started on a career in software:

The Salary of a Software Engineer vs. a Data Scientist

With the rise of digitalization, a job in IT has become more intriguing and attractive. On the other hand, more competition in the IT field forces software job seekers to keep up with the latest technologies in order to be competitive. However, the rate at which data is generated necessitates the hiring of more data scientists, and occupations in data science are currently among the highest paid jobs in the world.

Business analytics is the primary role of data scientists, followed by the development of data and software products employing algorithms. Due to a scarcity of trained personnel, both start-ups and corporations are in desperate need of data scientists. Professional data scientists are in high demand by global firms looking to stay ahead of the competition.

Data science and youngsters are inextricably linked because this generation grew up during the technological revolution. As a result, the internet and mobile technology developed at the same time as this generation. The global need for data scientists has created a skills deficit. If you’re keen on mastering new techniques for effective data management, you might be able to make a good living as a data scientist in the long run.

Being a software engineer should be your top priority if your interests match the level of creativity required by software companies while building software for general use. The amount of data created every day is staggering, implying that a smart data scientist may expect long-term growth and a competitive wage.