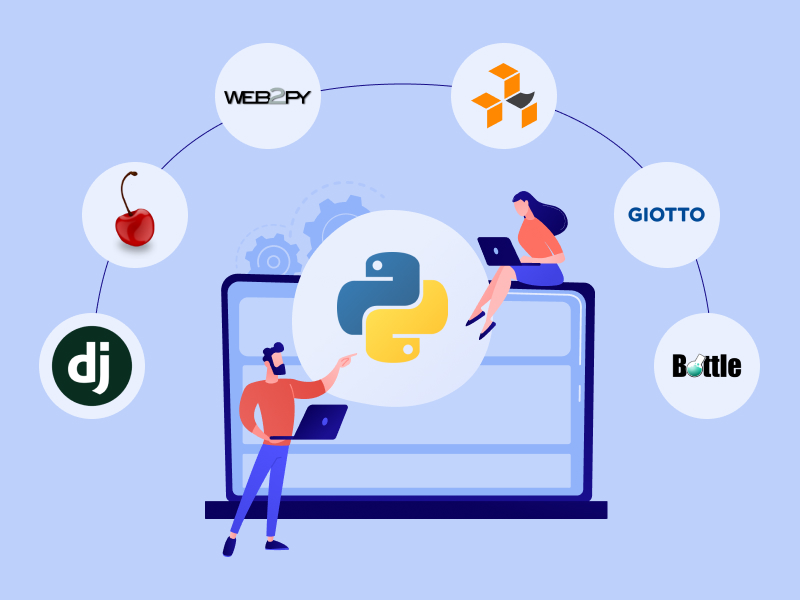 Written by sterlingsherry, In Technology, Published On
August 2, 2022
, 36 Views
+
Table of Contents

From Google to NASA, Python’s being used by some of the world’s biggest companies and government organizations to complete complex tasks and solve complex problems. It has become one of the leading popular programming languages for web development, says a survey by Statista, where Python secured 19% of all votes.

Python’s sheer variety of frameworks makes it easy to find one that fits your needs precisely. Whether you’re building an application to run your business or just something cool to share with your friends, these Python frameworks will make your life easier and your code cleaner and faster.

So if you’re trying to create a Python-based web application, check out our list of the ten best Python frameworks for web development!

Django is a high-level Python framework that encourages rapid development and clean, pragmatic design. Built by experienced developers, it takes care of much of the hassle of Web development, so you can focus on writing your app without needing to reinvent the wheel. It’s free and open source.

Django comes with excellent documentation, making it easy for beginners and professional web developers who want to build websites from scratch. Moreover, it also has high scalability, which proves effective for projects with many pages and concurrent users.

CherryPy is a Pythonic, object-oriented HTTP server engine written in Python. It enables developers to create simple and complex Web applications efficiently, thus providing a foundation for future growth. CherryPy stands out as a web framework because it can reduce the time it takes to write code that runs on the server by utilizing built-in tools such as static file handling, cookie handling, etc.

It also comes with a convenient module named cherrypy.test, which provides a set of methods for writing automated tests of Web applications under development. If you are looking for a Python-based framework that will provide you with all the necessary ingredients to build robust and high-performance web apps, look no further than CherryPy.

TurboGears is a Python web framework that combines the speed of rapid development with the stability of a well-formulated application platform. It was inspired by the Ruby on Rails framework and borrowed some of its best practices. The project was started in 2005 by Kevin Dangoor and Mark Ramm. As of early 2021, the TurboGears core team consists of seven members. The framework is released under an MIT license.

TurboGears’ best practices include managing asynchronous tasks with Celery, enabling unit testing with py.test, minimizing code repetition with DRY (Don’t Repeat Yourself) design patterns, etc. You can use Django, CherryPy, or both to build your application’s backend.

Flask is a Python framework built with a small core and easy-to-extend philosophy. It has several extensions for authentication, form validation, file uploads, and more. In addition to being lightweight & easy to get started with, Flask is also very fast.

Flask is ideal for projects requiring high scalability. It uses an asynchronous event loop to handle all requests, which lets it scale up to thousands of concurrent connections without slowing down. So, it’s an excellent choice for web applications that will be used heavily.

Web2Py was developed by a computer scientist from Italy named Massimo Di Pierro. It is described as an extremely fast, scalable, and versatile web application framework suitable for large-scale industrial and straightforward applications.

The current version of Web2Py is 2.21.1, released on November 27, 2020. Some of the features of Web2Py include an integrated IDE, support for multiple databases (including SQLite, MySQL, PostgreSQL, and Oracle), a web-based administrative interface, and an extensive set of libraries and APIs.

The bottle is a fast, simple microframework for Python based on Werkzeug, Jinja2, and good intentions. Its goal is to offer rapid prototyping capabilities with minimum effort. It is suitable for large projects since it lacks necessary functions such as session management or database interfaces. However, despite its limitations, Bottle tries hard not to make any decisions that are unnecessary or controversial.

The Sinatra framework inspires the Bottle micro-framework in Ruby. It’s used by companies like Pinterest and Instagram but has a straightforward API that programmers can use without much previous experience in Python or web development. The simplicity of Bottle can be seen in its API: there are only three functions (run(), render(), static()), and one class (Bottle).

Falcon is a great Python framework for building fast and lightweight web applications. It’s simple to use & can be easily integrated with other frameworks and libraries. Plus, it’s open source and regularly updated. It includes an interactive debugger that makes it easy to debug code.

Developers can integrate any type of template engine into your application. Falcon doesn’t have a global state, i.e., no concept of sessions or request objects. Falcon uses asynchronous execution, which means that there are no blocking threads.

Pyramid is one of the best Python frameworks for web development. It is based on the battery’s included philosophy, which includes many other components to aid in building an application, such as form validation, data modeling, generation utilities, SQL or object-relational mappers (ORMs), caching framework, and more.

It comes with exceptional speed performance, making it ideal for scaling applications to larger environments and enabling faster production deployment cycles. Moreover, it also comes with Python’s standard unit testing system, so you can test your code and keep errors from happening. It also integrates well with tools like Git, Mercurial, and SVN.

CubicWeb is a free and open-source Python-based web application framework. It was created by Logilab in 2003 and is now maintained by a community of developers. It has a modular and extensible design with a focus on reusability. You can use this python framework for developing knowledge management systems, intranets, content management systems, and other types of web applications.

It has an MVC model that allows the separation of the user interfaces from the data model. An extensive plugin allows adding new components to the system without changing its core code. CubicWeb has a pluggable storage layer allowing developers to choose among various storage backends, including relational databases, NoSQL databases, or local files.

Giotto offers controllers that allow you to build an app with web, IRC, and command line features. This framework lets you use your models or any default ones the project provides. It’s based on Python’s development principles: simplicity, brevity, explicitness, and readability.

Giotto comes with functional CRUD patterns that are easy to learn. One downside is that it doesn’t offer much support for databases other than SQLite, so you’ll have to write a lot of code for some operations. Still, this is a good choice if you want a simple framework.

Connecting with a python web development company helps you pick up the right frameworks per your business needs and project requirements.

Python frameworks simplify web development by providing a structure for your code and handling everyday tasks such as routing, authentication, and database access. Python frameworks 2022 are often used by big names like NASA, Facebook, Yahoo!, Foursquare and Instagram.

However, that does not mean you must use all the available frameworks available out there. It will unnecessarily make your application heavier in size. It is critical to analyze the business needs and essential features to choose a compatible framework.

Also Read: Quantum Machine Learning: Is it the next big thing?